INFORMATION REGARDING THE GENERAL ASSEMBLY

Shareholders may be represented by a proxy to be appointed by them among themselves or among the third persons at the general assembly meetings. Proxies holding share in the company are also authorized to cast votes of shareholders represented by them in addition to their own votes. Form of the certificate of authority is determined by the board of directors in accordance with the regulations of the Capital Markets Board. The certificate of authority must be in writing. The proxy must cast vote in line with request of the principal provided that it is stated in the certificate of authority of the principal shareholder. The applicable regulations of the Capital Markets Board are respected regarding voting by proxy.

Votes are casted by showing of hands at the general assembly meetings by presenting certificates those casted by proxy as per the regulations of the Capital Markets Board. However, ballot is applied upon request of those holding one-tenth of the capital represented by the present shareholders.

Those holding at least one share registered in their own name may participate in the meeting in person or by proxy.

Our shareholders who shall participate in the meeting in person are required to have them recorded in the “General Assembly Blockage List” of Merkezi Kayit Kurulusu A.S. and submit the General Assembly Blockage Form to be obtained by them from Merkezi Kayit Kurulusu in respect of the dematerialized shares held by them (certificates of authority of the person assigned by legal person shareholders for representation) to our Company up to the end of the working hours at least one week before the day of meeting.

Our shareholders who shall not be present at the meeting in person are required to issue the power of attorney in the form on our Company’s website and submit their power of attorney signatures of which are certified by the notary public to the Company’s Head Office.

Board of Directors’ and Auditor Reports and Independent External Audit Fir reports, Balance Sheet, Income Statement for the relevant year, proposal of our Board of Directors for profit distribution and agenda items shall be made available in our Company’s head office and on its website for review by our shareholders 21 days before date of the General Assembly meeting.

Servet GYO has always attached importance to talented people. If you’re aware of your talent and you want to convey it to us… 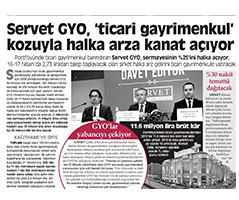 Click here to see news related with Sinpaş in the press